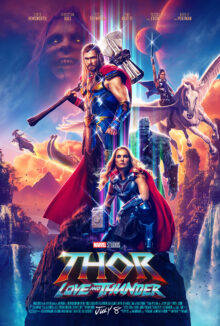 “Thor is Officially a Comedy”

The 29th Marvel film has just hit theaters everywhere! Thor’s 4thinstallment is out and it is larger than ever, with Chris Hemsworth also looking larger than ever as the muscular mythical Norse God of Thunder, lightning, and storms. TaikaWaititi directed the last installment, Thor: Ragnarök, which received well-deserved kudos for having a perfect blend of comedy, action, and heart in that previous film. This time around Director Waititi decided to go all out on the comedy and just let it rip!

The Thor storyline continues this time around with Thor having whipped himself back into physical shape after our last encounter with him as Fat Thor in the final Avengers film. Thor finds himself stagnant just waiting for whenever he is called to help some planet in need, but overall lonely and reminiscing of the only woman he has ever loved, Dr. Jane Foster. No spoiler here if you’ve already seen the trailer to this film, but Dr. Jane Foster for circumstances that I won’t divulge ends up gaining superpowers and becomes the Mighty Thor. Meanwhile, in a different realm/universe, we are introduced to the villain of this film, Gorr the God Butcher, played by none other than Christian Bale! As a villain, Christian Bale doesn’t disappoint one bit. In a film that is heavy on comedy and not too serious about its acting performances, Bale delivers the dramatics that is needed to help counterbalance the highly saturated comedic action film. My only gripe with his performance would be that I would have appreciated a few more scenes with him given his ability to carry every scene he was in effortlessly.

As I have mentioned a few times already, the film is not taking itself seriously whatsoever, but that is not necessarily a bad thing. I can say that almost every effort made by Director TaikaWaititi to have the audience laugh delivered. In my opinion, the only comedic scenes that were a little cringeworthy to watch were the ones carried out by actress Natalie Portman. I’m a fan of her dramatic work, but she seemed out of her comfort zone trying to be funny and comes off as a mom telling a corny joke. Taika Waititi once again takes on the character role of Korg, the rock-like comic relief character that we were introduced to in Thor: Ragnarök, who now has become Thor’s, right-hand man. There are many fun cameos by various actors such as Russell Crowe, playing the mythical God Zeus, Matt Damon once again playing thespian reenacting scenes from Thor’s life, and even Chris Hemsworth’s real-life son, wife, and brother all playing little roles. See if you can catch where each of them comes out in the film.

Overall, I had a blast watching the newest Thor film! I will say I enjoyed the previous film more, but possibly because I liked having moderation in comedy to action to dramatic scenes that this film didn’t evenly distribute. I can say I laughed a whole lot and left the theater feeling like I just saw the wackiest, funniest marvel film made thus far!