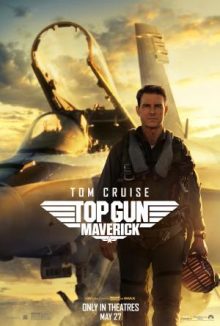 At long last, after 36 years the sequel to Top Gun hits the theaters nationwide! This is one of the rarest of sequels that has been slow cooking for quite some time and seemed to many audiences everywhere that it would possibly never take flight. Despite production being shelved for many reasons for years, this sequel was finally filmed & prepared for a dog fight in the theater. Then
Covid struck its missiles at every theater in America. Top Gun: Maverick ‘s flight was once again grounded. Now that theaters are locked and ready, would the appeal of fighter pilots grab younger generations’ attention span enough to divert them away from streaming shows and films and draw them to see Top Gun: Maverick on the big screen? I took my 15-year-old daughter to be my guinea pig young audience member and experience with me this high-octane action-infused blockbuster piloted once again by Tom Cruise into the danger zone!

Quick synopsis for you readers without any spoilers, I promise: Pete ‘Maverick’ Mitchell (Cruise) has been piloting many U.S. Navy Planes for years and is grounded after pulling a stunt that didn’t go well with high-ranking officials. Just when he thinks he is getting canned from the U.S. Navy, an old friend, Iceman, throws Maverick a lifesaver and gives him an opportunity to teach at Top Gun Academy to the very best fighter pilots the U.S. Navy has on deck for a time-sensitive mission. One of those new hot young fighter pilots is Maverick’s deceased co-pilot’s son, Lt. Bradley ‘Rooster’ Bradshaw (Miles Teller). Can Maverick rise to the challenge of teaching other pilots what he does best?

This film had all the original visual feel goodness that many viewers came to love, and then some! Tom Cruise and the rest of the new young cast members embraced what was right in the first film and made it an even better cover song than the original. The cinematography is literally decades better by far in regards to the fighter jets flying scenes. I felt immersed inside the fighter jets’ cockpit and could sense the pressure on my chest building up when the pilots were engaging with Mach 10 gravity pressure while they performed their death-defying flight maneuvers. You wouldn’t expect a heartfelt tear-jerkerto in a film such as this to be top-notch, but Tom Cruise is a master craftsman when it comes to ringing in genuine emotion to an action flick at just the most poignant of moments. Val Kilmer, Iceman, now a retired Commander, gives an amazing cameo despite his real-life vocal limitations after losing his vocal cords due to treatment of throat cancer. The reunion between Maverick and Iceman in this film is one that was worth the wait!

I know I have a biased opinion being an 80s baby who grew up marveled watching these blockbuster films back in the day with my older brothers and dad. I looked from time to time at my daughter and saw her have the same amazed enjoyed look I believe I had watching Top Gun as a kid. We laughed, we cheered, and we left the theater equally pleased with Top Gun:Maverick bringing back the wonder that audiences come to the movies for, to soar far away!