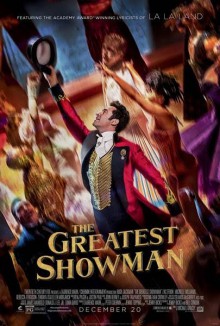 THE GREATEST SHOWMAN
In theaters December 20

“The Greatest Showman” is a bold and original musical that celebrates the birth of show business and the sense of wonder we feel when dreams come to life. Inspired by the ambition and imagination of P.T. Barnum, “The Greatest Showman” tells the story of a visionary who rose from nothing to create a mesmerizing spectacle that became a worldwide sensation.

ENTER TO WIN A SCREENING PASS:
Join LatinoScoop at an exclusive advance screening of THE GREATEST SHOWMAN in select locations below. Register for a chance to win a pair of seats at the advance screening in your city. LatinoScoop will randomly select winners in each city. Winners will receive a pair of GUARANTEED seats (seats MUST be claimed by 6:45PM). To enter, please send an email to screenings@LatinoScoop.com with your name, email and phone number. Enter your city in the subject line.