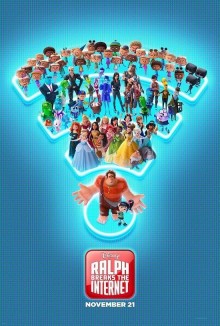 Synopsis
Ralph Breaks the Internet”  leaves Litwak’s video arcade  behind, venturing into the  uncharted, expansive and  thrilling world of the  internet—which may or may not  survive Ralph’s wrecking.  Video game bad guy Ralph ( voice of John C. Reilly) and  fellow misfit Vanellope von  Schweetz (voice of Sarah  Silverman) must risk it all  by traveling to theworld wide  web in search of a  replacement part to save  Vanellope’s video game, Sugar  Rush. In way over their heads,  Ralph and Vanellope rely on  the citizens of the internet— theNetizensto help navigate  their way, including Yesss ( voice of Taraji P. Henson),  who is the head algorithm and  the heart and soul of the  trend-making site “BuzzzTube,” and Shank (voice of Gal Gadot), a tough-as-nails driver from a gritty online auto-racing game called Slaughter Race. Directed by Rich Moore ( “Zootopia,” “Wreck-It Ralph”) and Phil Johnston (co-writer “Wreck-It  Ralph,” “Zootopia,” writer, “Cedar Rapids”), and produced  by Clark Spencer (“Zootopia,”  “Wreck-It Ralph,” “Bolt,” “Lilo & Stitch”), “Ralph Breaks the Internet” hits theaters on  Nov. 21, 2018.

GET A SCREENING PASS:
Join LatinoScoop at an exclusive advance screening of RALPH BREAKS THE INTERNET in select locations below. Click on the city name below for your city and enter the code. If you download a screening pass and aren’t able to use it, please share it with someone who can attend. There is a limited number of passes available for each location. Screening passes are available on a first-come, first-serve basis. Additional passes will not be added once they are all redeemed. Anyone downloading a screening pass is advised to arrive early to secure seating. The theater is intentionally overbooked by the studio to ensure a full house. Plan accordingly to arrive at the theater with enough time.