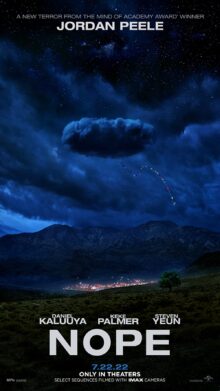 I’ve had a week to digest my viewing of Director/Writer Jordan Peele’s new film NOPE. This is Peele’s third directing/writing film to hit the big screen. Thus far Peele has generated a large audience fan base as a director that delivers suspenseful films that are frightening, funny, and original. Jordan Peele had already established himself as a popular comedic actor with his hit show Key &amp; Peele. Nonetheless, since his 2017 directing debut film “Get Out” hit theaters, his comedic chops are a distant memory that has been towered over by his massive success as a director that delivers scary goods. Would he be able to continue his rise as a solidified hit filmmaker with this new Sci-fi horror film? My verdict is a definite yep to NOPE!

As always, I will try not to give away too much in my review, but I stand to think that most of you who are reading this have at least seen the preview of the film and understand somewhat of what the premise seems to be hinting this film is all about. This isn’t something that is ever mentioned in the film, but I recently saw a snippet interview with the director where he shares that the title stands for an acronym: NOPE means “Not of Planet Earth.” Here’s my quick sentence synopsis of NOPE: An old horse ranch family in California that specializes in using its horses in the Hollywood industry believes there is a UFO that is hiding in the clouds around its ranch, which leads the owners of the ranch (Daniel Kaluya &amp; Keke Palmer) wanting to see if they can capture footage of it.

The main stars of NOPE are Daniel Kaluuya, Keke Palmer, Brandon Perea, and Steven Yeun. All due respect to these fine thespians, but the game ball goes to Keke Palmer as the most valuable player of this film! In my humble opinion, this film will stand to be Keke Palmer’s breakout to many more starring roles in future films because of how well she wrangled her role and left the rest of the cast in the dust! Don’t get me wrong, everyone else does their part well and all work fluidly together, but the star of this nail-biter is Keke. Shout out to Chicago’s own Brandon Perea for holding his own amongst some well-established actors especially with this being his first major motion picture.

NOPE reminded me quite a bit of one of my favorite M. Night Shyamalan films “Signs”. Peele’s story is original, but the similarity in the mystery behind an alien life form and the perspective coming from one family in a rural area totally made me reminisce back to the tense-filled fun that Signs delivered and NOPE drops from the sky onto its viewers. NOPE had me saying nope many times throughout every coming moment where the actors are about to face a frightful encounter. Peele’s NOPE continues to establish him as an original storyteller that delivers good old popcorn fun-filled fear at the movie theater!