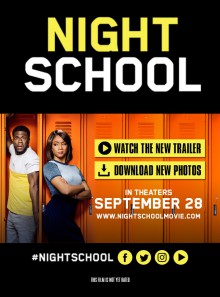 Star Kevin Hart and producer Will Packer, who partnered for the hit Ride Along and Think Like a Man series, bring their signature style to Night School.  The comedy from director Malcolm D. Lee (Girls Trip) follows a group of misfits who are forced to attend adult classes in the longshot chance they’ll pass the GED exam.

Co-stars Tiffany Haddish, Rob Riggle, Taran Killam and Romany Malco join Hart on-screen for the film that Hart produces for his Hartbeat Productions, and Packer via his Will Packer Productions.  www.nightschoolmovie.com

GET A SCREENING PASS:
Join LatinoScoop at an exclusive advance screening of NIGHT SCHOOL in select locations below. Click on the city name below for your city and enter the code. If you download a screening pass and aren’t able to use it, please share it with someone who can attend. There is a limited number of passes available for each location. Screening passes are available on a first-come, first-serve basis. Additional passes will not be added once they are all redeemed. Anyone downloading a screening pass is advised to arrive early to secure seating. The theater is intentionally overbooked by the studio to ensure a full house. Plan accordingly to arrive with enough time.