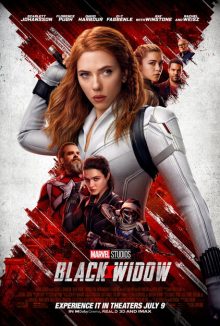 Natasha Romanoff aka Black Widow confronts the darker parts of her ledger when a dangerous conspiracy with ties to her past arises. Pursued by a force that will stop at nothing to bring her down, Natasha must deal with her history as a spy and the broken relationships left in her wake long before she became an Avenger. Joining Johansson in the new feature film are Florence Pugh as Yelena, David Harbour as Alexei/The Red Guardian, and Rachel Weisz as Melina. “Black Widow”—the first film in Phase Four of the Marvel Cinematic Universe—is directed by Cate Shortland and produced by Kevin Feige.

Premier Access provides an opportunity for consumers to watch newly released theatrical films on Disney+ for an additional one-time fee and an active Disney+ subscription. Disney+ subscribers can get Premier Access for a one-time fee of $29.99 per movie paid directly on disneyplus.com or on supported platforms. Once Premier Access has been unlocked, subscribers can enjoy a cinematic experience at home through the Disney+ app on a wide range of mobile and connected TV devices, including gaming consoles, streaming media players, and smart TVs.

Enter for a chance to win a Fandango code to go see BLACK WIDOW in theaters. LatinoScoop is giving away Fandango codes to see the film. For a chance to win a code, please submit your entry via email at screenings@LatinoScoop.com. When entering, please submit your full name, phone number, and email. Enter BLACK WIDOW in the subject line. LatinoScoop will randomly select winners. Winners will be notified via email.