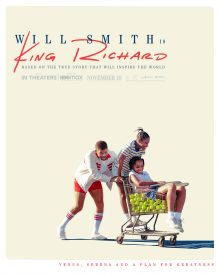 Based on the true story that will inspire the world, Warner Bros. Pictures’ “King Richard follows the journey of Richard Williams, an undeterred father instrumental in raising two of the most extraordinarily gifted athletes of all time, who will end up changing the sport of tennis forever. Two-time Oscar nominee Will Smith (“Ali,” “The Pursuit of Happyness,” “Bad Boys for Life”) stars as Richard, under the direction of Reinaldo Marcus Green (“Monsters and Men”).

Driven by a clear vision of their future and using unconventional methods, Richard has a plan that will take Venus and Serena Williams from the streets of Compton, California to the global stage as legendary icons. The profoundly moving film shows the power of family, perseverance and unwavering belief as a means to achieve the impossible and impact the world.

A Warner Bros. Pictures Presentation, A Star Thrower Entertainment Production, A Westbrook Production, A Keepin’ It Reel Production, “King Richard” is slated for U.S. release on November 19, 2021 in theaters and on HBO Max via the Ad-Free plan; it will be available on HBO Max for 31 days from theatrical release.

GET A SCREENING PASS:
Join LatinoScoop at an exclusive advance screening of KING RICHARD in select locations below. Click on the city name below for your city and enter the code. If you download a screening pass and aren’t able to use it, please share it with someone who can attend. There is a limited number of passes available for each location. Screening passes are available on a first-come, first-serve basis. Additional passes will not be added once they are all redeemed. Anyone downloading a screening pass is advised to arrive early to secure seating. The theater is intentionally overbooked by the studio to ensure a full house. Plan accordingly to arrive at the theater with enough time. All advanced screenings will take place on selected dates – please check the list below for the date and time.