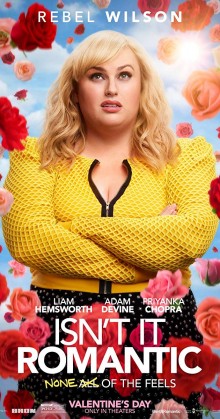 ISN’T IT ROMANTIC
In theaters February 13

New York City architect Natalie works hard to get noticed at her job but is more likely to be asked to deliver coffee and bagels than to design the city’s next skyscraper. And if things weren’t bad enough, Natalie, a lifelong cynic when it comes to love, has an encounter with a mugger that renders her unconscious, waking to discover that her life has suddenly become her worst nightmare—a romantic comedy—and she is the leading lady.

Wilson stars as Natalie, alongside Hemsworth as Blake, a handsome client; Devine as her co-worker and earnest best friend, Josh; and Chopra as Isabella, a model and self-proclaimed yoga ambassador.

Collaborating with Strauss-Schulson behind the scenes are director of photography Simon Duggan (“The Great Gatsby,” “Hacksaw Ridge”), production designer Sharon

New Line Cinema presents, in association with BRON Creative, a Broken Road/Little Engine Production, “Isn’t It Romantic.” Slated for release on February 13, 2019, the film will be distributed domestically by Warner Bros. Pictures.

The film has been rated PG-13 for language, some sexual material, and a brief drug reference.

GET A SCREENING PASS:
Join LatinoScoop at an exclusive advance screening of ISN’T IT ROMANTIC in select locations below. Click on the city name below for your city and enter the code. If you download a screening pass and aren’t able to use it, please share it with someone who can attend. There is a limited number of passes available for each location. Screening passes are available on a first-come, first-serve basis. Additional passes will not be added once they are all redeemed. Anyone downloading a screening pass is advised to arrive early to secure seating. The theater is intentionally overbooked by the studio to ensure a full house. Plan accordingly to arrive at the theater with enough time.