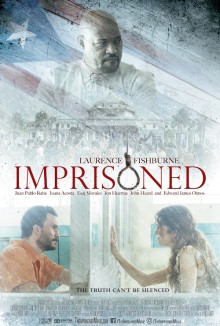 In the thriller, IMPRISONED, Dylan Burke (Juan Pablo Raba), attempts to move on from his former life as a criminal, with his true love, Maria (Juana Acosta). He soon realizes that his past will continue to haunt him, when he learns the new local prison warden, Daniel Calvin (Laurence Fishburne), has not forgiven him for an old crime.

Calvin does everything in his power to make sure that Burke pays for his past mistakes, even going as far as to frame him for a murder he didn’t commit, landing him back in jail. When the prison erupts into a riot, Burke and Calvin are each forced to make a choice between righteousness and revenge.

GET A SCREENING PASS:
Join LatinoScoop at an exclusive advance screening of IMPRISONED in select locations below. Click on the link for your city from the list below. If you download a screening pass and aren’t able to use it, please share it with someone who can attend. There is a limited number of passes available for each location. Screening passes are available on a first-come, first-serve basis. Additional passes will not be added once they are all redeemed. Anyone downloading a screening pass is advised to arrive early to secure seating. The theater is intentionally overbooked by the studio to ensure a full house. Plan accordingly to arrive at the theater with enough time. All advanced screenings will take place on selected dates – please check the list below for date and time.

The director Paul Kampf will be in attendance for a Q&A after the film.