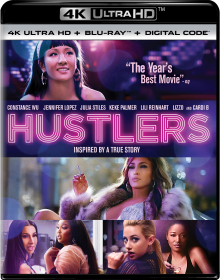 CONSTANCE WU AND JENNIFER LOPEZ LEAD A POWERFUL SISTERHOOD
INCLUDING JULIA STILES, KEKE PALMER, LILI REINHART AND CARDI B
IN THE EDGY AND UNAPOLOGETIC HEIST DRAMA

Inspired by true events, HUSTLERS is a comedy-drama that follows a crew of savvy strip club employees who band together to turn the tables on their Wall Street clients.

At the start of 2007, Destiny (Constance Wu) is a young woman struggling to make ends meet, to provide for herself and her grandma. But it’s not easy: the managers, DJs, and bartenders expect a cut– one way or another – leaving Destiny with a meager payday after a long night of stripping.

Her life is forever changed when she meets Ramona (Jennifer Lopez), the club’s top money earner, who’s always in control, has the clientele figured out, and really knows her way around a pole. The two women bond immediately, and Ramona gives Destiny a crash course in the various poses and pole moves like the carousel, fireman, front hook, ankle-hook, and stag. Another dancer, the irrepressible Diamond (Cardi B) provides a bawdy and revelatory class in the art of the lap dance.

But Destiny’s most important lesson is that when you’re part of a broken system, you must hustle or be hustled.

To that end, Ramona outlines for her the different tiers of the Wall Street clientele who frequent the club. The two women find themselves succeeding beyond their wildest dreams, making more money than they can spend – until the September 2008 economic collapse. Wall Street stole from everyone and never suffered any consequences. Now, Ramona, Destiny, and two dancers who’ve joined their little family – the unstoppable Mercedes (Keke Palmer) and the young and innocent Annabelle (Lili Reinhart) – look to turn the tables.

They cook up an inventive scheme to get their lives back on the fast-track to success. The game is still rigged against them, so to even the playing field Ramona devises a special drug cocktail that leaves their customers helpless against the ladies’ charms. Nobody’s really getting hurt, they reason; it’s just like robbing a bank, except the men are handing them the keys. The foursome create a bond tighter than any family—until things get out of control.

HUSTLERS brings together a compelling mix of humor, spectacle, social commentary, and a group of disparate women who team up and look for ways to even the odds that are stacked against them. In addition, says Constance Wu, it’s about a relatable issue that affects so many. “I had been looking to play a character who was deeply lonely, because of how our culture causes such loneliness,” she explains. “We need stories about that. Destiny is so beautiful to me because of her solitude, and the ways she tried to pretend her way out of it seemed counter intuitive, but also so very human.”