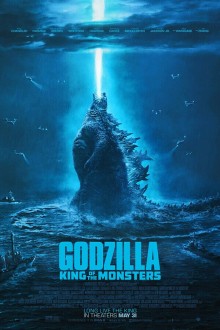 GODZILLA: KING OF THE MONSTERS
In theaters May 31

The new story follows the heroic efforts of the crypto-zoological agency Monarch as its members face off against a battery of god-sized monsters, including the mighty Godzilla, who collides with Mothra, Rodan, and his ultimate nemesis, the three-headed Ghidorah. When these ancient super-species—thought to be mere myths—rise again, they all vie for supremacy, leaving humanity’s very existence hanging in the balance.
Dougherty directed from a script he wrote with Zach Shields, story by Max Borenstein and Michael Dougherty & Zach Shields, based on the characters “Godzilla,” “King Ghidorah,” “Mothra” and “Rodan” owned and created by Toho Co., Ltd. The film was produced by Mary Parent, Alex Garcia, Thomas Tull, Jon Jashni and Brian Rogers, with Zach Shields, Barry Waldman, Hiro Matsuoka, Keiji Ota, Dan Lin, Roy Lee,  Yoshimitsu Banno and Kenji Okuhira serving as executive producers, and Ali Mendes and Jay Ashenfelter co-producing for Legendary.

GET A SCREENING PASS:
Join LatinoScoop at an exclusive advance screening of GODZILLA: KING OF THE MONSTERS in select locations below. Click on the city name below for your city and enter the code. If you download a screening pass and aren’t able to use it, please share it with someone who can attend. There is a limited number of passes available for each location. Screening passes are available on a first-come, first-serve basis. Additional passes will not be added once they are all redeemed. Anyone downloading a screening pass is advised to arrive early to secure seating. The theater is intentionally overbooked by the studio to ensure a full house. Plan accordingly to arrive at the theater with enough time. All advanced screenings will take place on Wednesday, May 29.