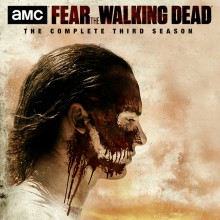 SANTA MONICA, CA (January 16, 2018) – Deception can be your deadliest enemy when Season 3 of “Fear the Walking Dead” – the companion series to the #1-rated cable series “The Walking Dead” – arrives on Blu-ray (plus Digital HD) and DVD March 13 from Lionsgate. As society collapses around them, the families must come together to survive the apocalypse and combat the deadly threats on all sides. Hailed as “the best full season so far” (Forbes), “Fear the Walking Dead” Season 3 stars Kim Dickens (Miss Peregrine’s Home for Peculiar Children, Gone Girl), Cliff Curtis (Risen, The Dark Horse), Frank Dillane (“Sense8,” Harry Potter and the Half-Blood Prince), and Alycia Debnam-Carey (Friend Request).

When “Fear the Walking Dead” returns for Season 3, our families are brought together in the vibrant and violent ecotone of the U.S.-Mexico border. With international lines done away with following the world’s end, our characters must attempt to rebuild not only society, but their families as well.

ENTER TO WIN:
To enter for a chance to win a DVD copy of FEAR OF THE WALKING DEAD Season 3, send an email to contest@LatinoScoop.com. When entering, please submit your full name, email address and phone number. LatinoScoop will select a few winners. Winners will be notified via email.