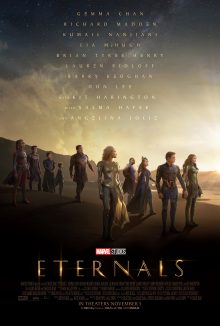 Marvel Studios’ “Eternals” follows a group of heroes from beyond the stars who had protected the Earth since the dawn of man. When monstrous creatures called the Deviants, long thought lost to history, mysteriously return, the Eternals are forced to reunite in order to defend humanity once again.

ENTER TO WIN:
Enter for a chance to win a Fandango code to go see ETERNALS in theaters starting November 5. LatinoScoop is giving away Fandango codes to see the film in the following cities listed below. For a chance to win a code, please submit your entry via email at screenings@LatinoScoop.com. When entering, please submit your full name, phone number, and email. Enter ETERNALS in the subject line. LatinoScoop will randomly select winners. Winners will be notified via email.

Enter to win for the following cities: