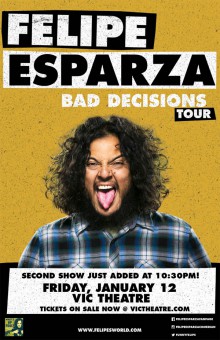 Chicago, IL (January 4, 2018) – Due to a sold-out show and extreme popular demand from fans, Comedian Felipe Esparza has added a second show in Chicago for his highly-anticipated “Bad Decisions Tour.” The second show will take place right after the first on January 12th at 10pm at the Vic Theater (3145 North Sheffield Chicago, IL).

After nearly four years of doing his “What’s Up Fool?” podcast, Felipe has found his new voice on stage and explores his tough past experiences to try and find humor in them. With the “Bad Decisions” tour, Felipe is now bringing material that is edgier and darker than before. He delves deeper into every bad decision he has ever made in life, including drugs, insane and mischievous practices, and experiences that remain questionable to this day!

Tickets are on sale now and fans (18 and over) should scoop them up before they sell out! For the latest news, tour info and to hear from the man himself, you can follow Felipe on Facebook, Twitter and Instagram.

ENTER TO WIN:
For a chance to win a pair of tickets to see Felipe Esparza in Chicago, please send an email to contest@LatinoScoop.com. When entering, please submit your full name, phone and email address. LatinoScoop will randomly select a winner. Winner will be notified via email on Thursday, January 11.