announces new dates and first line up of movies!

RECENT SPANISH CINEMA RETURNS TO THE EGYPTIAN THEATER IN HOLLYWOOD

Following the success of the previous editions The Spanish Institute of Cinematography and Audiovisual Arts (ICAA), The American Cinematheque and EGEDA US present and celebrate the 25h Anniversary of RECENT SPANISH CINEMA, a showcase of the most outstanding contemporary Spanish films at the Egyptian Theatre in Los Angeles, October 18-20, 2019.

This year’s series opens with the Los Angeles premiere of FATHER THERE IS ONLY ONE (PADRE NO HAY MÁS QUE UNO), Spain’s greatest box office success of 2019. The weekend of screenings will include critically acclaimed Spanish indies as well as blockbusters: the recently awarded at Malaga Film Festival  THE DAYS TO COME (ELS DIES QUE VINDRAN),the directorial debut of Celia Rico  JOURNEY TO A MOTHER’S ROOM (VIAJE AL CUARTO DE UNA MADRE) starring Lola Dueñas and Anna Castillo and  I CAN QUIT WHENEVER I WANT (LO DEJO CUANDO QUIERA) a comedy with a Star studded cast including Ernesto Alterio who will be presenting the movie at The Spanish series.

Up-and-coming as well as established filmmakers and actors from Spain will join us at the screenings.

This is the first line up of movies. Exact details of the event and information on media accreditation will be announced in the following weeks. Stay tuned!

FIRST LINE UP OF MOVIES

In one of Spain’s greatest box office successes of the year, Javier (Santiago Segura) begins the story of a hands-off father with a simplistic outlook on parenting. When he is tasked of caring for five children becomes by himself for a weekend, however, Javier struggles to control the chaos he had previously been content to leave to his wife. With physicality and depth of pathos as ingredients, director and co-writer Segura concocts this light-hearted recipe about falling in love with one’s children over again.

Mother Estrella (Lola Dueñas) has carefully controlled the world that she and daughter Leonor (Anna Castillo) inhabit. When Leonor resolves to make a new beginning in London, however, Estrella faces a life of solitude—a life in which she will have to find purpose apart from her child. Lovingly crafted and executed with a restrained understanding of mother-daughter relations by screenwriter-director Celia Rico Clavellino, VIAJE AL CUARTO DE UNA MADRE tells a tale of motherhood and of life’s continuation once the task of parenting has seemingly ended.

Carlos Marques-Marcet’s third feature-length film follows a couple in Barcelona, Vir (Maria Rodríguez Soto) and Lluís (David Verdaguer), who have only been dating for a year when they discover they have become pregnant. The film has a compelling documentary quality, in that the actors are a real-life couple expecting their first child. Marques-Marcet seizes this opportunity to create a hybrid film that offers an intimate and realistic view into the joys, fears, and challenges of pregnancy, and the radical change it brings to a relationship. The film took home several awards at the recent Málaga film festival. “A film that’s neither quite documentary nor quite fiction, and all the more intense because of that.” Jonathan Holland, Hollywood Reporter.

Pedro, Arturo, and Eligio spent their entire college life studying and focusing on their post-graduate careers. Fast forward ten years, and things haven’t gone as planned. After Pedro is fired from his job at the local University, the three friends decide to try a new pill he’s been developing in his lab. They soon realize the potential profits of selling the new drug and are quickly swept into the exciting and dangerous world of drug dealing. Our heroes are getting a second shot at having fun in their youth, but at what cost?  David Verdaguer (10,000 KM, LOS DIAS QUE VENDRAN) stars as Pedro in this hilarious romp around Madrid’s club scene. 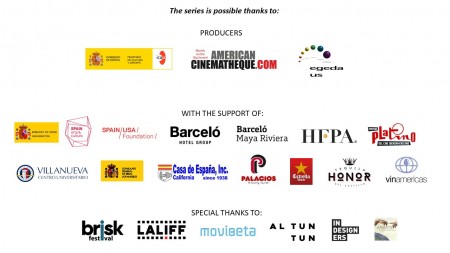