Stars of ‘BOOKSMART’ talk friendship and message behind the film

Stars of ‘Booksmart’ talk friendship and message behind the film
An incredibly hilarious coming-of-age movie you don’t want to miss
By Jesus J. Montero 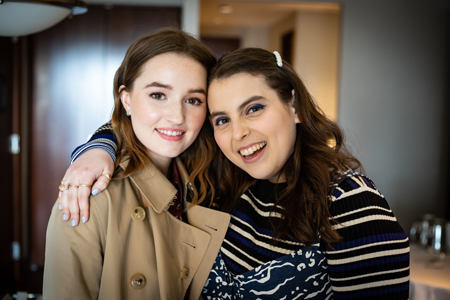 It is difficult to depict real-life feelings and emotions onscreen accurately. Very few teen comedy’s nail showing the truth that adolescent face as they approach adulthood. Booksmart captures the reality and hard facts of friendship and a lot more.

There are many reasons to watch the incredibly hilarious Booksmart. From the perfectly ensembled cast, inclusive modern storytelling, and the flat-out insanely witty chemistry of its two leads.

First-time director, Olivia Wilde, shines with a rapid-fire delivery of non-stop laughs. The straightforward story of teen friendship guides us through a night that many can relate to. The fear of missing out makes us reevaluate what’s important in life.

In Booksmart, we follow Amy (Kaitlyn Dever) and Molly (Beanie Feldstein) as two overachieving high school seniors reflecting their life choices the night before graduation. Feldstein discovers that all of her peers who partied non-stop during high school all got accepted into Ivy League universities too.

Furious, Feldstein convinces Dever that they must embark on one epic party night filled with bad behavior. They both feel they’ve missed out on the “high school experience”, because they focused all their attention on preparing for life after graduation.

This teen comedy is breaking the mold in more ways than its often compared, another groundbreaking teen comedy film, Superbad. Superbad created and established careers for over a decade. Booksmart is masterfully told and delivered that it’s an easy bet to predict it will do just that, if not more.

In a sit-down interview with LatinoScoop, co-stars Dever and Feldstein spoke about their feelings on friendship and Booksmart.

Both your characters feel they have given up certain liberties to be successful. Do you see any similarities in those feelings as actors who often juggle their personal lives and acting responsibilities?

Dever: “There’s a lot of messages in Booksmart. Olivia wanted it to be like that. One message being is you are not defined by what school you get into. It doesn’t have to be the be all and end all of your life.”

Dever: “I relate to that, that’s such a universal thing even for school, acting or any other job. It’s also like getting the Oscars for actors, the end for some. If you don’t get that it doesn’t mean anything, it doesn’t define you. I believe working hard and having a balance of the two identities is key.”

Feldstein: “There’s this very common phrase in the theater world that goes, “I can’t. I have rehearsal”, which is right up my upbringing. (laughs)

Feldstein: “At least when you’re doing Broadway you can’t do anything at night. Your schedule is flip-flopped to the rest of the world. But, because I love it so much, I never felt like I was missing out on anything. I mean there were a few times I missed out on events, but I didn’t feel bad after because I know the feeling of joy of living what I always dreamed of for myself.”

Dever: “I went to high school, but I was also doing a show at the same time. I was going to school three times a week instead of five days while being on set. Everyone always asked me, “Did you do you regret making that decision?” It was all, it was all on me. It was the decision that I made. You shouldn’t have any regrets if you’re doing what you love.”

Amy and Molly in Booksmart are the perfect best friends. They love each other very much. They also are super honest with each other which causes a fight. That honestly hits hard when telling the truth. Can you relate to a hard truth coming from someone you genuinely care about?

Dever: “It’s hell. It’s like one of the hardest things to do. I almost think it’s like worse than getting in a fight with a family member because the stakes are so high, and I think that Olivia achieves in showing that.

Feldstein: “We see multiple examples of family fighting. It’s a huge genre, but there are few true honest depictions of friends fighting in a sincere, honest, painful way. That’s what I love about Booksmart, it’s always a very sincere and true movie even when it goes so funny and so outlandish, you’re going to have a blast, but also you’re going to feel something.”

Feldstein: I always get so emotional watching their big fight because they’re saying what the other one needs to hear. Me and my best friend from high school had that fight and we still talk about it today, but it was so important for our friendship, but like we would never want to do that again. We’re happy that it happened.

Final question, we can’t spoil any of the crazy events in the film, but what’s your one “it got out of control” party related story you can share publicly?

Dever: “I have to say we are both very much like our characters that we’ve never done literally anything.”

Dever: “I went and took one gummy worm from the bowl section and this woman who was an attendant standing right there the whole time. My whole world had ended. She said, “Do you know that is stealing?” I yelled back saying, “But my grandma said it was okay!” (laughs) I still remember how much guilt I felt to this day. I felt so bad.

Feldstein: “In middle school, I remember I was so excited they opened a container store at my local mall. My friend and I were like roughhousing with the carts. I was putting her in the cart, she was little, and I was pushing her fast, wheeling her around and we got asked to leave! That was fun. They were like, “Sweetheart, I need you to be quiet.” (laughs)

Booksmart is set to be released nationwide on May 24.