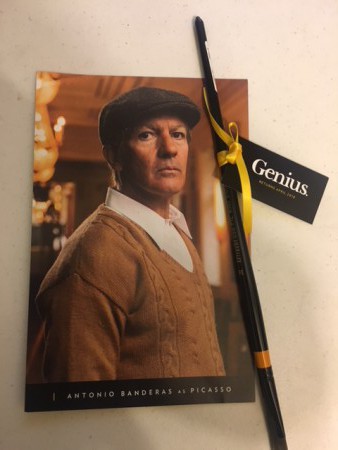 (WASHINGTON, D.C. – November 2, 2017) National Geographic and Fox 21 Television Studios, along with Imagine Television today announced the key cast joining previously announced Antonio Banderas in the second season of the Emmy-nominated anthology series GENIUS. The new cast is highlighted by Alex Rich (“GLOW,” “True Detective”), who will share the title role with Banderas, playing a young Pablo Picasso, one of the 20th century’s most influential and celebrated artists. Production begins this month and will shoot in cities all over Europe for the 10-episode anthology series. The new season, from Fox 21 Television Studios, will again be executive produced by Brian Grazer and Ron Howard’s Imagine Entertainment, Madison Wells Media’s OddLot Entertainment and EUE/Sokolow, and will premiere in 2018.

Joining Rich are Clémence Poésy (“Harry Potter & The Goblet of Fire,” “In Bruges”) as Francoise Gilot, a French painter and best-selling author whose decadelong affair with Picasso yielded two children; Sebastian Roche (“Young Pope”) as Emile Gilot, Francoise’s tyrannical father; Robert Sheehan (“Fortitude,” “Misfits”) as Carlos Casagemas, a Spanish art student and poet who was one of Picasso’s closest friends; Poppy Delevingne (“Kingsman: The Golden Circle,” “King Arthur: Legend of the Sword”) as Marie-Thérèse Walter, a lover and muse of Picasso, who mothered his first daughter; and Aisling Franciosi (“Game of Thrones,” “The Fall”) as Fernande Olivier, a French artist and model who Picasso painted more than 60 portraits of.

Several cast members from the first season of GENIUS will return to the franchise, including Samantha Colley (“The Crucible”) as Dora Maar, a French photographer and painter who was also Picasso’s lover and muse; T.R. Knight (“Grey’s Anatomy,” “The Catch”) as Max Jacob, one of Picasso’s first friends in Paris; Seth Gabel (“Salem”) as Guillaume Apollinaire, one of the foremost poets of the 20th century and a frequent collaborator with Picasso; and Johnny Flynn (“Lovesick”), as French actor Alain Cuny.

“Working with a repertory company of versatile actors playing different roles in different seasons of a show has long been on my professional bucket list. To that end, bringing together many of our original GENIUS cast with an impressive roster of new international actors to tell the rich and provocative story of Pablo Picasso is truly a thrill,” said Ken Biller, executive producer and showrunner, who will also direct the first episode.

The artistic career of Pablo Diego Jose Francisco de Paula Juan Nepomuceno Crispin Crispiniano Maria Remedios de la Santisima Trinidad Ruiz Picasso spanned more than 80 of his 91 years, much of it in his second home, France. Much like the subject of the first season of GENIUS, Albert Einstein, Picasso imagined and interpreted the world in totally new and unorthodox ways, and constantly reinvented our perceptions of art and creativity. The prolific artist generated an estimated 50,000 works, among the most notable being “The Old Guitarist” from his Blue Period, now on display at the Art Institute of Chicago; “Guernica,” inspired by the Nazi bombing of a small Spanish town of the same name, recently displayed at the Museo Reina Sofia in Madrid; and “Les Demoiselles D’Avignon,” now on display at the Museum of Modern Art in New York City.

Picasso’s passionate nature and relentless creative drive were inextricably linked to his personal life, which included tumultuous marriages, numerous affairs and constantly shifting political and personal alliances. He lived most of his life in the vibrant Paris of the first half of the 20th century and crossed paths with writers and artists including Coco Chanel, Henri Matisse, Marc Chagall, Gertrude Stein, Georges Braque and Jean Cocteau. Picasso constantly reinvented himself, always striving to innovate and push the boundaries of artistic expression.