Six-week showcase hosted by UNICEF, Girl Up and Disney will feature inspiring images from female photographers created to encourage kids around the globe to dream big

On November 16, 2017,  Disney launched its series of empowering #DreamBigPrincess photographs on display as an inspirational exhibit at the United Nations Headquarters in New York City. The gallery will run today through the first week of January in collaboration with Girl Up and UNICEF, the UN Children’s Fund. The images captured by nineteen female photographers from fifteen countries showcase the inspiring stories of real-world girls and women, as part of Disney’s Dream Big, Princess initiative launched in 2016, which taps into the power of Disney Princess stories to encourage kids to follow their dreams.

“This initiative is about celebrating the positive impact of strong female role models, whether that’s Moana, Tiana or one of the amazing real-world subjects of the #DreamBigPrincess images. We’re thrilled with the response to the campaign and excited to partner with Girl Up, at the United Nations Foundation to showcase these powerful images to such an international audience,” said Jimmy Pitaro, Chairman, Disney Consumer Products and Interactive Media.

The display will feature the compelling images from the campaign’s award-winning photographers and their subjects, who have turned their dreams into reality. From the youngest ever speaker at the UN to a gold-medal-winning Chinese Paralympian, the founder of the first female cycling team in Bamiyan, Afghanistan, a teenage author of a STEM coding book for kids, and a young surf champion from Brazil, the images spotlight a diverse range of stories to connect with kids and families around the world.

As well as inspiring kids with positive images and the stories behind them, the campaign aimed to make a tangible difference for girls who face challenges in achieving their dreams, through a collaboration with Girl Up, at the United Nations Foundation. For each like or post of a #DreamBigPrincess photo during the campaign timeframe, Disney donated $1 to Girl Up to support girls’ leadership and empowerment. Since their release in August, the images have been liked and shared millions of times online, enabling Disney to donate $1 million to Girl Up.

“#DreamBigPrincess really caught the collective imagination and we are so grateful to everyone who liked, shared or created their own inspiring image to support the campaign,” comments Girl Up Director, Melissa Kilby. “The $1 million will help give thousands of girls around the globe the tools they need to achieve their goals and advocate on behalf of others.”

The campaign brought the #DreamBigPrincess message to life in a multitude of ways, including highlighting women who’ve achieved success in the face of adversity, young Girl Up Teen Advisors who’ve already helped make a positive impact on the world, and girls at play who illustrate the importance of imagination in childhood. Thousands of people also posted their own inspiring images using #DreamBigPrincess, a select number of which will be exhibited alongside the original photographs at the United Nations and supported by UNICEF, which works to protect children’s rights, to help meet their basic needs and to expand their opportunities to reach their full potential. A core component is to advance gender equality and the rights of girls.

“Imagine a world where every girl follows her dream, and is safe, healthy, and can go to school,” said Paloma Escudero, Director of Communications for UNICEF. “It is our collective duty to help make this world a reality and empower girls to reach their full potential.”

In 2016, Disney launched “Dream Big, Princess”, a campaign that encourages kids everywhere to dream big by highlighting key story moments and the inspiring qualities that each Disney Princess showcases through her adventures, such as Merida’s bravery, Cinderella’s kindness or Tiana’s perseverance. While each princess has her own unique and admirable qualities, what they all have in common is resilience and an ability to triumph over adversity to make their dreams come true. The Dream Big, Princess content series, which runs across Disney TV and digital networks globally, brings together a host of empowered moments from beloved Disney movies with the stories of real-life young role models, who have dreamed big and achieved their goals to show kids what’s possible.

The exhibit is proudly presented by UNICEF, United Nations Foundation Girl Up, and Disney, and co-hosted by the Permanent Missions of Brazil, Germany, India, and Kenya. The exhibit will be open for public viewing in the UN visitors lobby via pre-scheduled guided tours Monday-Friday or on the weekends via a UN security pass. For more details on hours, location and security clearance please visit http://visit.un.org/content/ location. 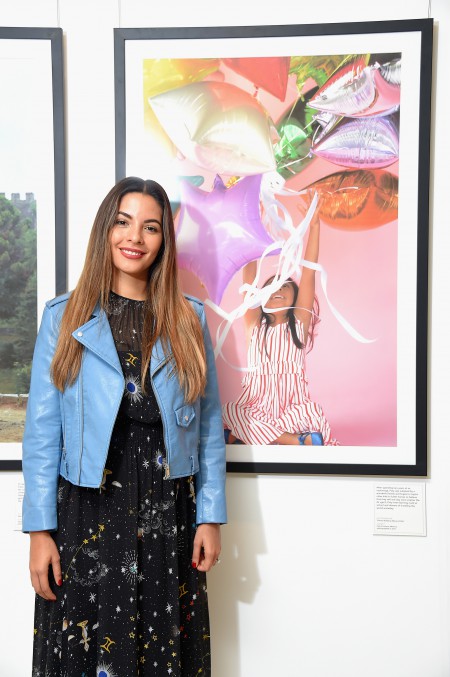 NEW YORK, NY – NOVEMBER 16: Photographer Theresa Balderas next to her image taken as part of Disney’s Dream Big, Princess global photography series in support of the United Nations Foundation’s Girl Up. The series of images will be on display at a six-week exhibit at the United Nations Headquarters in New York on November 16, 2017 in New York City. (Photo by Michael Loccisano/Getty Images for Disney)