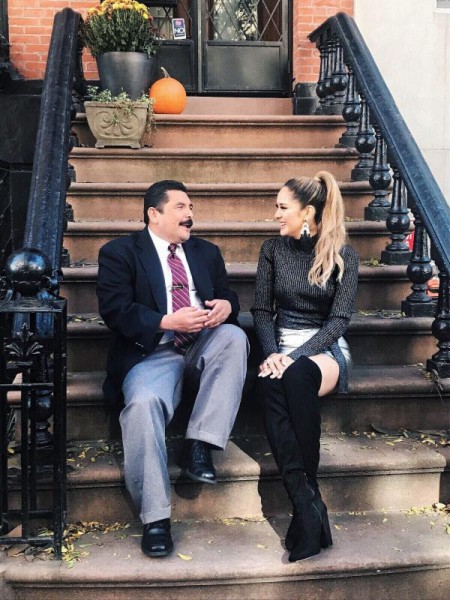 LOS ANGELES, CA (October 23rd, 2017). New York native and singer-songwriter Karen Rodriguez participated on a special segment of ABC’s Jimmy Kimmel Live! last Friday. The program is usually taped in Los Angeles but came to Brooklyn for a week’s worth of episodes in the town where Jimmy Kimmel was born. In the special segment sponsored by American Family Insurance, Karen meets with Guillermo to talk about dreams – the show’s lovable and comedic security guard then grants Karen’s wish by leading her to Barclays Center for a special show in front of thousands of fans.

This skit was shot last Tuesday during her performance at the Tidal X Benefit Concert, where some of the biggest names in the music industry such as Jay-Z, Jennifer Lopez, Daddy Yankee, Luis Fonsi and Stevie Wonder, joined forces to raise money for disaster relief to support the victims of Hurricane Harvey, Hurricane Irma, Hurricane Maria and the earthquakes in Mexico City.

“This has been one of the most special nights of my career so far. Using the power of music to bring relief to all these people in need was amazing! Also, sharing the stage with so many artists that I admire in front of such a lovely audience, was truly a dream come true,” said Rodriguez about her participation at the Tidal X Benefit Concert.

Last week, Rodriguez also broke a personal record with her latest video for her smash hit “No Me Verás Llorar,” which reached one million views in the first five days of its debut on her official YouTube channel. The flamenco-infused song was produced by the Rude Boyz and co-written by Karen Rodriguez in Miami with a team of songwriters including Latin GRAMMY-nominated Mario Caceres, who received a nomination for his recent work on Maluma’s smash hit ‘Felices los 4.’