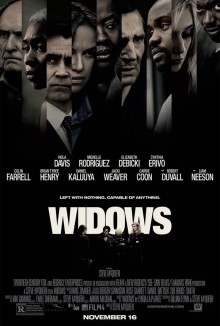 SYNOPSIS
From Academy Award®-winning director Steve McQueen (“12 Years a Slave”) and co-writer and bestselling author Gillian Flynn (“Gone Girl”) comes a blistering, modern-day thriller set against the backdrop of crime, passion and corruption. “Widows” is the story of four women with nothing in common except a debt left behind by their dead husbands’ criminal activities. Set in contemporary Chicago, amid a time of turmoil, tensions build when Veronica (Oscar® winner Viola Davis), Linda (Michelle Rodriguez), Alice (Elizabeth Debicki) and Belle (Cynthia Erivo) take their fate into their own hands and conspire to forge a future on their own terms. “Widows” also stars Liam Neeson, Colin Farrell, Robert Duvall, Daniel Kaluuya, Lukas Haas and Brian Tyree Henry.

ENTER TO WIN A SCREENING PASS:
Join LatinoScoop at an exclusive advance screening of WIDOWS  in select locations below. Register for a chance to win a pair of seats at the advance screening in your city. LatinoScoop will randomly select winners in each city. Winners will receive a pair of GUARANTEED seats (seats MUST be claimed at least 45 mins prior to the start of the film). Winners will be selected and notified via email on Friday, October 26, 2018. Names of winners will NOT be posted. To enter, send an email to screenings@LatinoScoop.com. When entering, submit your full name, phone number and email address. Enter WIDOWS & CITY in the subject line.

Advance screenings will take place in the following cities below at 7:30PM.