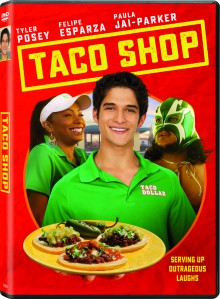 From A Producer of Selena
Tyler Posey, Felipe Esparza, and Paula Jai-Parker Come Together for the Ultimate Comedy

Experience the Battle for Taco Supremacy
On DVD & Digital May 1

In this slapstick comedy, Smokes (Posey) plays a young man who fights to keep his job at Taco Dollar after a gourmet taco truck parks across the street and threatens its survival. An all-out war ensues as Bruce (Brian Huskey) and his band of cholos challenge the crew of Taco Dollar for taco supremacy. TACO SHOP also stars Carlos Alazraqui (“Elena of Avalor”), Dan Bakkedahl (“VEEP”), Eric Roberts (The Expendables), and Brian Huskey (“Bob’s Burgers”).

TACO SHOP has a run of approximately 84 minutes and is rated PG-13 for Crude and Sexual Content, Language, Some Innuendo and Drug Material.

For more information about the film, please visit www.tacoshop-movie.com and please use the hashtag: #tacoshopmovie