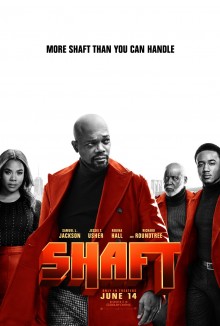 New Line Cinema’s action comedy “Shaft” is the next chapter in the film franchise featuring the coolest private eye on any New York City block.

The film is produced by John Davis (“Game Night,” “Joy”) under his Davis Entertainment banner.

GET A SCREENING PASS:
Join LatinoScoop at an exclusive advance screening of SHAFT in select locations below. Click on the city name below for your city and enter the code. If you download a screening pass and aren’t able to use it, please share it with someone who can attend. There is a limited number of passes available for each location. Screening passes are available on a first-come, first-serve basis. Additional passes will not be added once they are all redeemed. Anyone downloading a screening pass is advised to arrive early to secure seating. The theater is intentionally overbooked by the studio to ensure a full house. Plan accordingly to arrive at the theater with enough time. All advance screenings will take place on Wednesday, May 7.

CHICAGO:
Send an email to screenings@LatinoScoop.com – submit your full name, phone number and email. When submitting, enter SHAFT – CHI in the subject line. LatinoScoop will select winners and they will be notified via email.