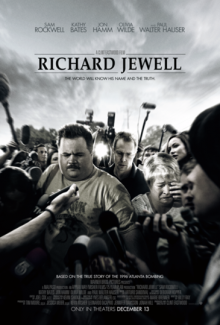 Eastwood’s creative team includes director of photography Yves Bélanger and production designer Kevin Ishioka, along with longtime costume designer Deborah Hopper and Oscar-winning editor Joel Cox (“Unforgiven”), who have worked with Eastwood throughout the years on numerous projects. The music is by Arturo Sandoval, who scored 2018’s “The Mule.”

GET A SCREENING PASS:
Join LatinoScoop at an exclusive advance screening of RICHARD JEWELL in select locations below. Click on the link for your city from the list below. If you download a screening pass and aren’t able to use it, please share it with someone who can attend. There is a limited number of passes available for each location. Screening passes are available on a first-come, first-serve basis. Additional passes will not be added once they are all redeemed. Anyone downloading a screening pass is advised to arrive early to secure seating. The theater is intentionally overbooked by the studio to ensure a full house. Plan accordingly to arrive at the theater with enough time. All advanced screenings will take place on selected dates – please check the list below for date and time.