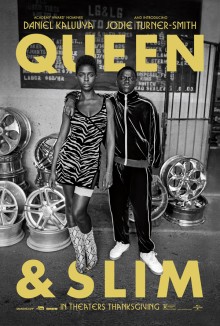 Thank you for this journey…no matter how it ends.

From two-time Grammy award winning director Melina Matsoukas, the visionary filmmaker behind this generation’s most powerful pop-culture experiences, including HBO’s Insecure, the Emmy award-winning “Thanksgiving” episode of Netflix’s Master of None, and Beyonce’s “Formation,” and from trailblazing, Emmy-winning writer Lena Waithe (Netflix’s Master of None), comes the unflinching new drama, Queen & Slim.

While on a forgettable first date together in Ohio, a black man (Get Out’s Daniel Kaluuya) and a black woman (Jodie Turner-Smith, in her first starring feature-film role), are pulled over for a minor traffic infraction. The situation escalates, with sudden and tragic results, when the man kills the police officer in self-defense. Terrified and in fear for their lives, the man, a retail employee, and the woman, a criminal defense lawyer, are forced to go on the run. But the incident is captured on video and goes viral, and the couple unwittingly become a symbol of trauma, terror, grief and pain for people across the country.

As they drive, these two unlikely fugitives will discover themselves and each other in the most dire and desperate of circumstances and will forge a deep and powerful love that will reveal their shared humanity and shape the rest of their lives.

Joining a legacy of films such Set It Off and Thelma & Louise, Queen & Slim  is a powerful, consciousness-raising love story that confronts the staggering human toll of racism and the life-shattering price of violence.

Universal Pictures and Makeready present Queen &Slim in association with 3BlackDot and Bron Creative, a Makeready/De La Revolución Films/Hillman Grad/3BlackDot production. Universal Pictures will distribute the film worldwide, with eOne handling distribution in select territories including the U.K. and Canada.

GET A SCREENING PASS:
Join LatinoScoop at an exclusive advance screening of QUEEN & SLIM in select locations below. Click on the link for your city from the list below. If you download a screening pass and aren’t able to use it, please share it with someone who can attend. There is a limited number of passes available for each location. Screening passes are available on a first-come, first-serve basis. Additional passes will not be added once they are all redeemed. Anyone downloading a screening pass is advised to arrive early to secure seating. The theater is intentionally overbooked by the studio to ensure a full house. Plan accordingly to arrive at the theater with enough time. All advanced screenings will take place on selected dates – please check the list below for date and time.