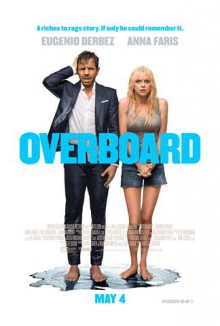 OVERBOARD
In Theaters May 4

Metro-Goldwyn-Mayer Pictures (MGM) and Pantelion Films presents Overboard, a fresh take on the iconic romantic comedy. In a splashy new twist, Overboard focuses on “Leonardo” (EUGENIO DERBEZ), a selfish, spoiled, rich playboy from Mexico’s richest family and “Kate” (ANNA FARIS), a working class single mom of three hired to clean Leonardo’s luxury yacht. After unjustly firing Kate and refusing to pay her, Leonardo falls overboard when partying too hard and wakes up on the Oregon coast with amnesia. Kate shows up at the hospital and, to get payback, convinces Leonardo he is her husband and puts him to work – for the first time in his life. At first miserable and inept, Leonardo slowly settles in. Eventually he earns the respect of his new “family” and co-workers. But, with Leonardo’s billionaire family hot on their trail and the possibility of his memory returning at any moment, will their new family last or will Leonardo finally put the clues together and leave them for good? A Metro-Goldwyn-Mayer Pictures and Pantelion Films of a 3Pas Studios production, Overboard is set for release on May 4, 2018.

ENTER TO WIN A SCREENING PASS:
Join LatinoScoop at an exclusive advance screening of OVERBOARD in select locations below. Register for a chance to win a pair of seats at the advance screening in your city. LatinoScoop will randomly select winners in each city. Winners will receive a pair of GUARANTEED seats (seats MUST be claimed at least 45 mins prior to the start of the film). Winners will be selected and notified via email on Monday, April 30, 2018. Names of winners will NOT be posted. To enter, send an email to screenings@LatinoScoop.com. When entering, submit your full name, phone number and email address. Enter OVERBOARD in the subject line.

Advance screenings will take place in the following cities below: