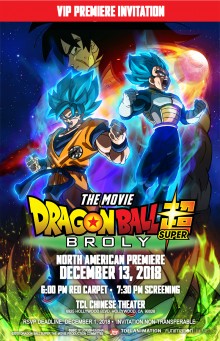 “Dragon Ball Super: Broly” follows the events of the hit anime series “Dragon Ball Super,” the first new Dragon Ball storyline from original creator Akira Toriyama in more than 18 years. Since premiering in summer 2015, “Dragon Ball Super” has propelled the popularity of the franchise globally – with both lifelong fans and a new generation of children and teens. The last Dragon Ballfilm, “Dragon Ball Z: Resurrection ‘F’” (2015), was a box office hit – grossing $8M in North America to become the first independent film to make the Top 10 list of highest grossing anime films domestically.

ENTER TO WIN:
Join LatinoScoop at the premiere screening of DRAGON BALL in Los Angeles on Thursday, December 13. To enter, send an email to screenings@LatinoScoop.com and submit your full name, email address, and phone number. LatinoScoop will select 10 winners to attend. Each winner will receive one pass (good for two) to enter the premiere. Winners will be notified via email on Tuesday, December 11.