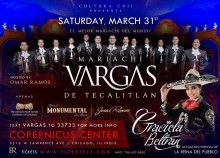 In 2003 Mariachi Vargas de Tecalitlán began its fifth generation. Their latest recordings are, “5ta Generacion”, “Sinfonico I”, “Sinfonico II”, and “Penas, Desengaños… Y Amores”. Today the group is composed of two harps, one vihuela, one guitar, one guitarron, two trumpets and six violins. With the added instruments, a new sound has emerged that crosses all international borders. The music they play now ranges from the traditional sones to classical works as well as popurris. In the 100 years since its foundation, the group has gone through some major changes. While there has been some departure from the tradition during that time, the group has maintained its roots through the playing of traditional Mexican sones. In 1997, “Mariachi Vargas de Tecalitlán” celebrated its first One Hundred years of foundation.

Mariachi Vargas De Tecalitlán is a Mexican folk ensemble of mariachi music created in 1897 by Gaspar Vargas. From 1950 it has been under the artistic guidance of Rubén Fuentes. The group’s musical direction had been the responsibility of Don Jose “Pepe” Martínez from 1975 to around 2013-14. Now the ensemble is under the direction of Carlos Martínez (ex-director of Mariachi Nuevo Tecalitlan).