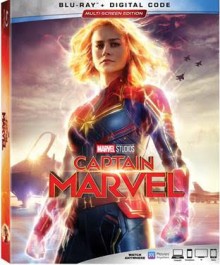 IS NOW AVAILABLE ON BLU-RAY™ COLLECTIONS AND DIGITAL

Arriving home with extensive line-up of extras detailing the development of this highly anticipated addition to the Marvel Cinematic Universe (MCU), “Captain Marvel” includes Featurettes that highlight the transformative journey of Brie Larson (Captain Marvel) and her character’s impact on audiences around the globe; the influence of Nick Fury (Samuel L. Jackson) on significant events within the MCU; the perfect pairing of directors Anna Boden & Ryan Fleck; the ongoing conflict between the Skrulls and the Kree; and the raw talent behind the fetching feline named Goose. Viewers also gain access to six deleted scenes, director commentary, a gag reel loaded with funnies, flubs and Flerkens, and never-before-seen concept art and production photography.

“Captain Marvel” comes packaged in various formats to best fit today’s varying consumer desires. Viewers can bring home the film two weeks early on Digital 4K Ultra HD, HD and SD and gain access to two exclusive features, including a behind-the-scenes visit with the Visual Effects team that makes the filmmakers’ visions of the MCU come to life and an inside look at the epic team effort that goes into an action-packed sequence within a Marvel Studios film. A physical copy of “Captain Marvel” is available as either a 4K Cinematic Universe Edition (4K UHD+Blu-ray+Digital Copy) or a Multi-Screen Edition (Blu-ray+Digital Copy), granting fans the flexibility to watch on devices of their choice.

BONUS MATERIAL (may vary by retailer):

To enter for a chance to win a Blu-ray copy of CAPTAIN MARVEL, send an email to contest@LatinoScoop.com. When entering, please submit your full name, email address and phone number. LatinoScoop will select a few winners. Winners will be notified via email.