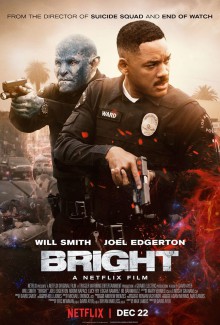 Set in an alternate present-day where humans, orcs, elves, and fairies have been co-existing since the beginning of time. Bright is genre-bending action movie that follows two cops from very different backgrounds. Ward (Will Smith) and Jakoby (Joel Edgerton), embark on a routine patrol night and encounter a darkness that will ultimately alter the future and their world as they know it.

ENTER TO WIN A SCREENING PASS:
Join LatinoScoop at an exclusive advance screening of BRIGHT in select locations below. Register for a chance to win a pair of seats at the advance screening in your city. LatinoScoop will randomly select winners in each city. Winners will receive a pair of GUARANTEED seats (seats MUST be claimed by 6:45PM). To enter, please send an email to screenings@LatinoScoop.com with your name, email and phone number. Enter your city name in the subject line.

Winners will be selected and notified via email on Monday, November 13. Winners names will NOT be posted.