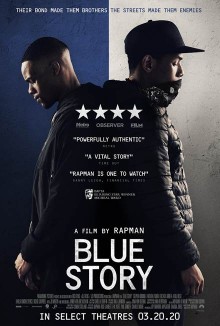 invites you to an advance screening of
BLUE STORY

SYNOPSIS | Best friends Timmy (Stephen Odubola) and Marco (Micheal Ward) go to the same high school in Peckham, but live in neighboring London boroughs. When Marco’s beaten up by one of Timmy’s primary school friends the two boys wind up on rival sides of a never-ending cycle of gang war in which there are no winners … only victims.

Andrew Onwubolu (aka Rapman) is making his directorial and acting debut with BLUE STORY, which he also penned.

In BLUE STORY, best friends Timmy (Stephen Odubola) and Marco (Micheal Ward) go to the same high school in Peckham but live in neighboring London boroughs. Timmy is enjoying first love with Leah (Karla Simone Spence) but then finds himself and Marco on rival sides of a gang war where there are no winners… only victims.

BLUE STORY was released theatrically in the UK last year and was nothing short of a sensation — passionate audience response and a 92% on Rotten Tomatoes. The film stars Micheal Ward, who just won the BAFTA Rising Star Award and who NME magazine calls “London’s Newest Leading Man.” BLUE STORY recently won Best Film at the 2020 NME Awards, where Micheal Ward was also named Best Actor. Rapman caught the eye of Jay-Z, and is currently one of his clients at Roc Nation. He was recently included on Variety’s “10 Europeans to Watch” list.

GET A SCREENING PASS:
Join LatinoScoop at an exclusive advance screening of BLUE STORY in select locations below. Click on the link for your city from the list below. If you download a screening pass and aren’t able to use it, please share it with someone who can attend. There is a limited number of passes available for each location. Screening passes are available on a first-come, first-serve basis. Additional passes will not be added once they are all redeemed. Anyone downloading a screening pass is advised to arrive early to secure seating. The theater is intentionally overbooked by the studio to ensure a full house. Plan accordingly to arrive at the theater with enough time. All advanced screenings will take place on selected dates – please check the list below for date and time.