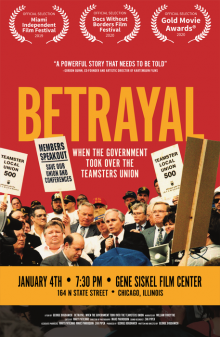 BETRAYAL: WHEN THE GOVERNMENT TOOK OVER THE TEAMSTERS UNIION | Chicago Premiere

The expanded 70 minute version of the powerful documentary “Betrayal: When the Government Took Over the Teamsters Union” will have its Chicago premiere at the Gene Siskel Film Center, 164 N. State on Saturday, January 4th at 7:30 pm followed by another screening January 9th at 7:45 pm.

The expanded version of the film, has gained national and international recognition, including selection by three film festivals — the Gold Movie Awards in London, Docs Without Borders and the Miami Independent Film Festival. There is a local focus as the film documents the efforts of respected Chicago Teamster official William Hogan Jr. to lead the fight against government overreach which has trampeled on the rights of free speech and due process for 1.4 million union members for three decades. Former Watergate prosecutor and current MSNBC legal analyst Jill Wine-Banks writes:

“Never until this film did I see such a lack of due process and restriction on freedom of speech as portrayed here. Government oversight at the very high price shown in this film needs investigation and an answer from the government.”

Instead of building cases against criminal elements in the union, then US Attorney Rudy Giuliani used the Civil RICO statute in 1989 to take over the entire International Brotherhood of Teamsters in ways that violated the protocols of the court and denied a promised democratic union convention vote to approve or disapprove a consent decree enabling the government takeover. The documentary shows:

The film was produced and directed by George Bogdanich, a writer, publicist, filmmaker and former political consultant. Bios about the filmcrew and information about the production can be found at the website https://www.betrayalfilm.org/ which also contains media stories, comments and a trailer.

Aside from Rudy Giuliani, the film highlights others current newsmakers including Jack Goldsmith, author of In Hoffa’s Shadow¸ a best-selling book that challenges the account of Hoffa’s death portrayed in Martin Scorsese’s film “The Irishman.” Goldsmith who teaches at Harvard Law and served as an Assistant US Attorney General is a co-founder of the influential Lawfare Blog and has questioned the harsh regime of the Justice Department over the Teamsters.

For those who may be interested, interviews can be arranged with the filmmaker George Bogdanich, William Hogan Jr. as well as actors Jim Belushi who worked on four Chicago based films with Hogan, William Forsythe, who narrated the documentary and Linda Fiorentino who is also familiar with Hogan’s ordeal and civil liberties activist Christie Hefner who appeared in the film.