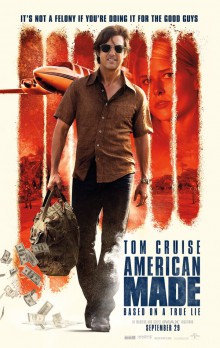 AMERICAN MADE
In theaters September 29

In Universal Pictures’ American Made, Tom Cruise reunites with his Edge of Tomorrow director, Doug Liman (The Bourne Identity, Mr. and Mrs. Smith), in this international escapade based on the outrageous (and real) exploits of a hustler and pilot unexpectedly recruited by the CIA to run one of the biggest covert operations in U.S. history.

ENTER TO WIN:
LatinoScoop is giving away a few pairs of screening passes to fans who would like to attend the AMERICAN MADE advance screening on Wednesday, September 27. To enter, send an email with your full name, phone number, email address and city location from the list below to screenings@LatinoScoop.com. When entering, please enter ‘AMERICAN MADE / LA’ in the subject line. LatinoScoop will randomly select a few winners to attend. Winners will be notified via email on Monday, September 25.

AMERICAN MADE advance screenings will take place in the following cities below.