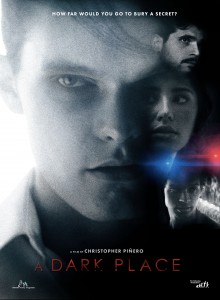 A DARK PLACE AVAILABLE ON BLU-RAY, DVD, DIGITAL HD AND ON DEMAND AUGUST 13, 2019

HOW FAR WOULD YOU GO TO BURY A SECRET?

Gravitas Ventures, a Red Arrow Studios company, has acquired the United States rights to A DARK PLACE, directed by Christopher Piñero. The film will be available on Digital HD, Blu-rayTM, DVD and On Demand on August 13, 2019.

A DARK PLACE follows Alex, a twenty-something struggling to put his life back together after mistakes and a reckless past render his job search hopeless. While pressure from his pregnant girlfriend mounts, he runs into an old friend who gives him an opportunity to turn it all around. Just when things are looking up, Alex discovers a secret that sends him into a self-destructive downward spiral, bringing his two best friends down with him.

The film was named Best Thriller at the Manhattan Film Festival (2018), won Best Editing and Best Supporting Actor at the Hoboken international Film Festival (2018) and was the recipient of an Award of Excellence from the Accolade Global Film Competition (2018).