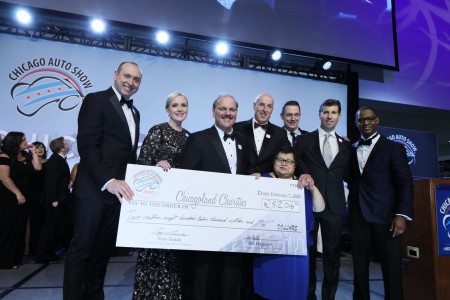 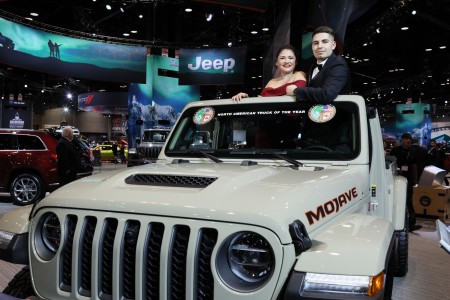 CHICAGO (Feb. 11, 2020) – Eighteen area charities tonight shared more than $2.8 million raised by the 2020 Chicago Auto Show’s benevolent event, First Look for Charity, and one attendee left with the keys to a new vehicle.

The black-tie benefit, which is held the evening before the auto show opens its 10-day public run, raised $2,812,016, boosting its total raised to more than $56 million over 29 years.

“First Look for Charity is a great instrument for the area’s new-car dealers to show the positive impact they have on their community,” said Tony Guido, chairman of this year’s auto show. “All the benefiting charities are involved locally, so the money that’s raised in Chicago stays in Chicago.”

As the name of the event implies, those who attend First Look for Charity are part of the premier viewing of each year’s Chicago Auto Show. Tickets to the fundraiser are $275 each, and purchasers can elect to have their proceeds equally benefit all participating charities, or any one charity of their choosing. For the event, the auto show floor is replete with live entertainment and a variety of exquisite food and beverage stations.

A highlight of the evening was the drawing for the event’s grand prize, this year a 2020 Ford Explorer ST. After the five-minute allowance for a winner to match the first ticket stub drawn expired, Mychel Watts of Calumet Park, in south suburban Cook County, screamed that she’d matched the second number even before the countdown clock began ticking.

“I’m feeling in shock,” she said afterward. “I came alone tonight. All my friends declined to go and I said ‘To heck with you all, I’m going.’”

Watts directed the proceeds of her ticket purchase to benefit all the event’s charities. Wintrust, the Chicago Auto Show’s official bank sponsor, gave her a $250 gift card.

This year’s beneficiaries included the 100 Club of Chicago, Advocate Health Care, the ALS Association Greater Chicago Chapter, Boys & Girls Clubs of Chicago, and Catholic Charities of the Archdiocese of Chicago.

The Explorer was compliments of Ford Motor Co. and the Chicagoland Ford Dealers Association.

For more information on the 2020 Chicago Auto Show, visit www.ChicagoAutoShow.com.