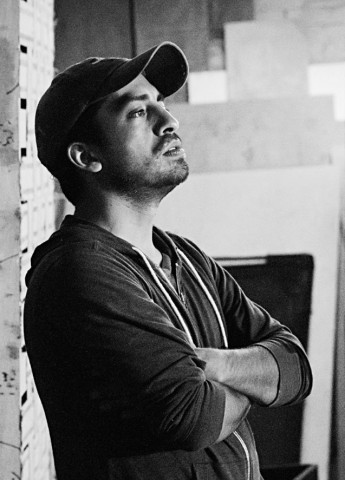 Hurtado describes his film as “a visual story of distance.” In the film a younger sister asks about love and life with the elder sister expresses that our biggest fears can also be our most treasured gifts.

“The inspiration behind creating this project was to tell a story of an emotion that everybody can relate to, Love, and naturally weave that together with the beauty that is architecture, paintings, clothing, nature, and us,” says Hurtado. He adds, “Each element has a tale and history behind it.

Hurtado spared no expense in his production of “Cry.” Choosing exotic and emotionally inspiring film locations throughout Mexico – such as Hacienda del Jaral de Berrios in Guanajuato, Mexico for the film’s moody ghostly scenes. The young filmmaker also chose to work in the difficult to film in, but fantastically other worldly environment of water with his subaquatic scenes being shot in the Scotiabank Aquatics Center’s diving pool. Built for the 2011 Pan American Games, and considered the most modern aquatic complex of it’s kind, Hurtado made good use of the diving pool’s 18 feet depth to portray a scene of dark endless deep water. The most magnificent setting of “Cry” may be the Teatro Juarez overlooking the city of Guanajuato, Hurtado uses the theater’s red velvet curtains to open the main story of his film. He also uses the theater’s rooftop to film the city below cooled by the shadow of a mountain hiding a setting sun, and the ambitious young director highlights his subjects, two twirling ballerinas performing for an empty theater. Hurtado also makes use of Mexico’s countryside with scenes of two beauties lost and alone by a lake, stream and forest.

While most of the fashion films are sponsored by a fashion line, Hurtado took it upon himself to create “Cry” to fulfill a long time considered film project that mixes magical realism and dreamscape settings with an element of fashion. Says Hurtado, “My goal is to make fashion films for big brands, but the story was the main reason I made “Cry.”

The International Fashion Film Awards, now in it’s tenth year, is known as the “Cannes of fashion film,” and Hurtado himself is a former Cannes Film Festival award winner so it makes sense that Hurtado would venture into this very stylistic and high profile setting. Recently listed by Forbes Magazine’s as the top fashion film festival in the world, stars in both fashion and filmmaking are born at the La Jolla based festival. There is much buzz surrounding all aspects of the festival especially it’s red-carpet fund raiser which is said to be quickly giving the Met Gala a run for its likes and money.

Hurtado recognizes the importance of being selected for the La Jolla Fashion Film Festival.

“Just being selected for one category in the La Jolla International Fashion Film Awards is a great honor, to be nominated for six different categories leaves me incredibly humbled” says Hurtado.

For more information on Carlos Hurtado, or to view some of his films visit… http://carloshurtadofilms.com/