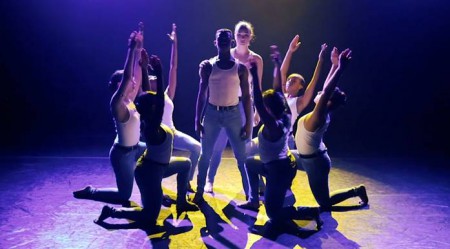 In partnership with 20th Century Fox and BOHEMIAN RHAPSODY, The ChiArts School has just released a music video inspired by legendary rock band Queen and their lead singer, Freddie Mercury!  The video takes viewers on a journey through Queen’s most impactful songs while 10 students interpret Freddie’s voice through body movement and his iconic wardrobe.

The school’s artistic director, José Ochoa lead the exciting production. “As Illinois’ first public arts high school we are so proud to have created an institution where our students can be who they truly are in a safe and supportive environment. We have loved this video project because it so embodies who we are as a school and gives our students the opportunity to show who they are. We are thrilled to contribute to the promotion of BOHEMIAN RHAPSODY and empower future generations to be their best queen,” shared Ochoa.

The students were thrilled when Ochoa first shared the opportunity with them. “It was a new experience for me, my first time in a music video and hopefully not my last time. It was surprising how we shot it all in one day. I’ve been listening to Queen since I was little, the choreography flowed with the music and the Freddie Mercury costumes were amazing. It was unforgettable working with the other dancers and we got to be ourselves in the process,” said Sebastian Candanedo a ChiArts Dance Major. Jasmine Chavez who also majors in dance said, “it gave me a little insight on what show business is like! It was a great experience and it made me so excited for my future. I hope to one day be in a production with my peers again!”

More on The ChiArtsSchool:
The Chicago High School for the Arts (ChiArts) is Chicago’s first public high school for the arts. With disciplines in creative writing, dance, music, theatre, and visual arts, ChiArts provides its scholar-artists with a tuition-free, pre-professional arts training program paired with a college-preparatory academic curriculum. Opened in 2009, ChiArts was recently ranked in the top 7% of high schools nationwide and graduated its sixth senior class in May 2018. For more information, visit chiarts.org or social media platforms at Facebook, Twitter and YouTube. #WeAreChiArts

SYNOPSIS
Bohemian Rhapsody is a foot-stomping celebration of Queen, their music and their extraordinary lead singer Freddie Mercury. Freddie defied stereotypes and shattered convention to become one of the most beloved entertainers on the planet. The film traces the meteoric rise of the band through their iconic songs and revolutionary sound. They reach unparalleled success, but in an unexpected turn Freddie, surrounded by darker influences, shuns Queen in pursuit of his solo career. Having suffered greatly without the collaboration of Queen, Freddie manages to reunite with his bandmates just in time for Live Aid. While bravely facing a recent AIDS diagnosis, Freddie leads the band in one of the greatest performances in the history of rock music. Queen cements a legacy that continues to inspire outsiders, dreamers and music lovers to this day.