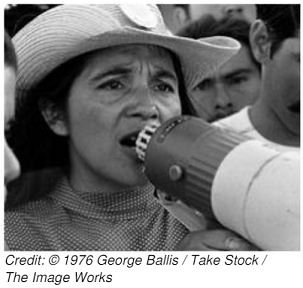 (San Francisco, CA) — One of the most important, yet least known activists of our time, Dolores Huerta was an equal partner in founding the first farm workers union with César Chávez. Tirelessly leading the fight for racial and labor justice, Huerta evolved into one of the most defiant feminists of the 20th century — and she continues the fight to this day, at 87. Directed by Peter Bratt, and produced by Bratt and Brian Benson, “Dolores” premieres on Independent Lens Tuesday, March 27, 2018, 9:00-11:00 p.m. ET (check local listings) on PBS.

With unprecedented access to this intensely private mother of 11, “Dolores” chronicles Huerta’s life from her childhood in Stockton to her early years with the United Farm Workers, from her work with the headline-making grape boycott launched in 1965 to her role in the feminist movement of the 70s to her continued work as a fearless activist. Featuring interviews with Gloria Steinem, Luis Valdez, Hillary Clinton, Angela Davis, her children and more, “Dolores” is an intimate and inspiring portrait of a passionate champion of the oppressed and an indomitable woman willing to accept the personal sacrifices involved in committing one’s life to social change.

“In the 1970s, the national grape boycott that Dolores Huerta helped organize played out in the small rural Minnesota farming community where I grew up — supported by our Catholic church along with tens of thousands of religious organizations across the country,” said Lois Vossen, Independent Lens executive producer. “More than 40 years later, Dolores is still an indefatigable architect for social change on behalf of poor, underrepresented people, urging them to seek self-determination with her refrain ‘Si Se Puede’ (‘Yes We Can’).”

Visit the “Dolores” page on Independent Lens, which features more information about the film. The film will be available for online viewing on the site beginning February 27.

About Dolores Huerta
Dolores Clara Fernández was born on April 10, 1930, in Dawson, a small mining town in New Mexico; she spent most of her childhood and early adult life in Stockton, California, where she and her two brothers moved with their mother following their parents’ divorce. Independent and entrepreneurial, her mother was an active participant in community affairs.

After graduating from high school, Dolores earned a teaching degree, married and had two daughters. Seeing her students come to school with empty stomachs and bare feet inspired her lifelong commitment to correcting economic injustice. She found her calling as an organizer while serving in the leadership of the Stockton Community Service Organization (CSO). During this time, she founded the Agricultural Workers Association, set up voter registration drives and pressed local governments for barrio improvements.

It was in 1955 that she met a like-minded colleague, CSO Executive Director César E. Chávez. The two soon discovered that they shared a common vision of organizing farm workers and in 1962 they launched the National Farm Workers Association, which would evolve into the United Farm Workers and bring national attention to the conditions faced by farm laborers.

Huerta’s lobbying and negotiating talents helped secure Aid for Dependent Families (AFDC) and disability insurance for farm workers; she was also instrumental in the enactment of the Agricultural Labor Relations Act of 1975, which granted California’s farm workers the right to collectively organize and bargain for better wages and working conditions. While the farm workers lacked financial capital, they were able to wield significant economic power through hugely successful national boycotts. As their principal legislative advocate, Huerta became one of the UFW’s most visible spokespersons.

While directing the first National Boycott of California Table Grapes out of New York, Huerta met Gloria Steinem and was introduced to the burgeoning feminist movement, which rallied behind the farm workers’ cause. Having found a supportive voice with other feminists, Huerta began to challenge gender discrimination within the farm workers’ movement.

At age 58, Huerta suffered a life-threatening assault while protesting against the policies of then presidential candidate George Bush in San Francisco. Following a lengthy recovery, she began to focus on women’s rights, traversing the country on behalf of the Feminist Majority’s “Feminization of Power: 50/50 by the Year 2000” campaign which encouraged Latinas to run for office.

Huerta continues to work tirelessly developing leaders and advocating for the working poor, women and children as founder and president of the Dolores Huerta Foundation. She was inducted into the California Hall of Fame in March of 2013 and has received numerous awards including The Eleanor Roosevelt Human Rights Award from President Clinton in 1998, Ladies Home Journal’s “100 Most Important Woman of the 20th Century,” and nine Honorary Doctorates from U.S. universities. In 2012, President Obama bestowed on Huerta her most prestigious award, The Presidential Medal of Freedom.