Los Angeles, CA. (Thursday, February 15, 2018). GRAMMY Award-winning duo Jesse & Joy celebrated Valentine’s Day last night with a spectacular concert at United Palace in New York City. Their fans were delighted by the Mexican pop sensation’s romantic hits, which made for the perfect musical accompaniment for such a special date dedicated to love.

To celebrate this unforgettable night, Jesse & Joy invited a group of Dreamers to attend their show, in order to highlight the importance of fighting for these young people who are uncertain about their future and the possibility to remain in the United States legally. Jesse & Joy have joined the battle to demand fair legislation for DACA recipients and an overall immigration reform.

One of the most touching moments of the night came when the duo’s music video for their song “Un Besito Más” appeared on the screens. The video follows the daily life of an immigrant Mexican family in the United States, as they grapple with the recent deportation of the parents, leaving behind a young daughter who is an American citizen. 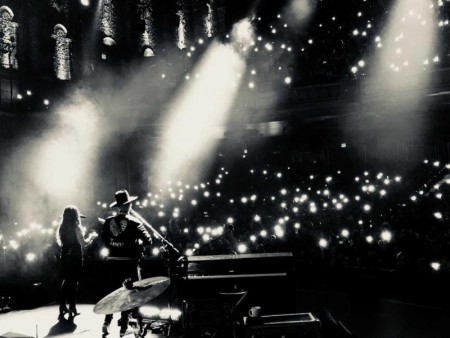 Last week, Jesse & Joy earned a nomination for a Billboard Latin Music Award in the “Best ‘Latin Pop’ Artist Of The Year Duo or Group” category. The ceremony will take place in the city of Las Vegas on April 26th and will be broadcasted live for the first time in its history on Telemundo.

On Friday February 23rd Jesse y Joy will be performing at the 59th edition of the Viña del Mar International Song Festival in Chile, where they will share the best of their repertoire in an event that has always been a historic platform for Ibero-American songwriters and has been the stage for the greatest artists in Latin music for more than 50 years.